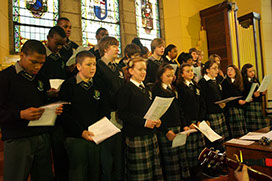 The school choir have been busy this year singing a wide variety of songs from Rolling in the Deep by Adele, to the religious version of The Cup Song.  They performed at this year’s Seinn, which celebrates Catholic Schools Week, along with 700 other students from Dundalk.  They have also performed at all school masses and gatherings to date. We were delighted when Father Jimmy asked the students to perform for the launch of Operation Transformation on Ash Wednesday.  It was a great opportunity for the students to represent the school and they received great praise from the local community.

The choir, along with the first year music class will be recording a CD in the next few weeks.  One of our 6th year students, Keenan Copas, has written a song for the choir to record.  They will aim to raise money for the Marist Missions out of the sales.   Both the music class and choir will record their own CDs which, while not for sale, will be a great opportunity for them to express their own musical interest.

Recently the first year music class attended the showcase of South Pacific, a well-known musical performed at DKIT by their students.  It was a great opportunity for the students to see a live orchestra perform the various instruments they had studied.