Naoise Durnin and Rebecca Lambe Fagan from St. Mary’s College recently took part in the final of Gael Linn’s prestigious ‘Abair’ Irish public speaking competition, which was this year held in The Seamus Heaney HomePlace in Bellaghy in Derry.

Naoise and Rebecca qualified for the final having previously achieved first and second place in the regional bout in Newry in February. Speakers from across the nine counties of Ulster and Co. Louth compete in the annual cross-border competition.

Competitors on the day had to speak about a topical issue as Gaeilge for three minutes each. In the final Naoise spoke about her chosen topic of ‘Na meáin shóisialta’ / ‘Social Media’, while Rebecca spoke about ‘Saol Stephen Hawking’ / ‘The life of Stephen Hawking’.

They were delighted to win both first and second place in the junior section of the competition and received high commendation from the judges. They were both awarded trophies and half scholarships to attend Coláiste Gael Linn Bhun an Inbhir Gaeltacht College in Donegal to recognise their tremendous success. Gael Linn Chief Executive Antoine Ó Coileáin, and Foras na Gaeilge Deputy Chief Executive Edel Ní Chorráin awarded the prizes on the day. Comhghairdeas mór leo. 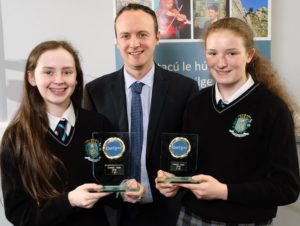 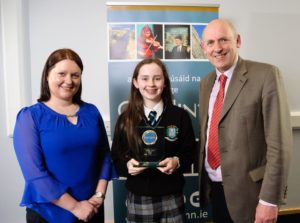 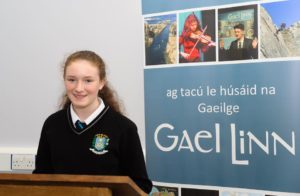 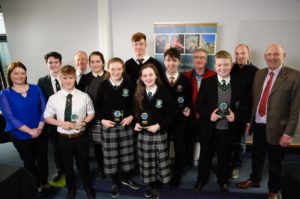