Easter was an exciting time at St Mary’s College as a group of students, under the guidance of Mr. Murphy, Mr Lally and Mr Hegarty embarked on what was destined to be an experience of a life-time.

Setting out from Dundalk their journey firstly took them to the Glasgow Science Centre where students enjoyed interactive exhibitions and workshops. They then made the short journey to Celtic Park, or what their supporters fondly call ‘Paradise’. What followed was an action-packed game in which the newly crowned champions defeated local rivals Kilmarnock in an unbelievable atmosphere.

Sunday witnessed the group participate in a competitive game of ten – pin bowling and some shopping but the trip was capped off with a personal guided tour of Celtic Park and St Mary’s Church Hall, the spot were Celtic FC were founded. Students were treated to a visit to the first team dressing room and followed onto the pitch in the footsteps of their heroes.

It was a poignant moment for the Marist students as they learned of how Brother Walfrid, a Marist Brother from Sligo, established the club in order to feed the starving Irish immigrants in the east end of Glasgow. The strong Marist connection and ethos of Celtic was undoubtedly felt by the young group who left determined that this trip would be on an annual basis. 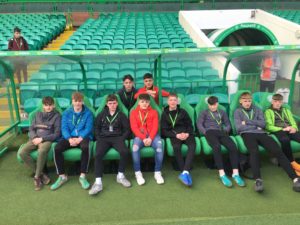 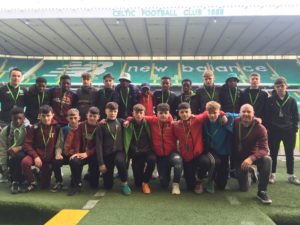