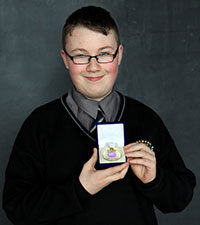 Second year student Luke Coburn Moran will represent Leinster in the hotly-contested MATHletes Challenge after making it through to the National Final in May.

Luke beat off stiff competition from 12,000 potential students and will now compete in the play-offs in a bid to be crowned MATHletes Challenge All Ireland Champion. He was awarded his regional title at an event at Google HQ in Dublin recently and is now through to the National Final. He is in the top 20 in the country.

MATHletes Challenge is a tournament which aims to transform how young people learn and how Maths is taught in Ireland using Khan Academy. The competition culminates with scorers advancing to in-person playoffs, where over €20,000 in prizes are on offer.