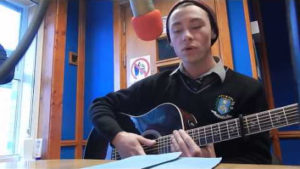 Comhghairdeas to fifth year student Jake Mc Ardle who is the 2015 IYMAs (Irish Youth Music Awards) recipient.  Jake competed with singers and songwriters from across the country to take the accolade. He won the competition with a song that he composed himself, “Pull Through”.

He appeared on RTÉ 2 recently as IYMAs winner and sang his winning song live in studio. See his live TV performance here.

His team are now getting ready to record a full length album which will be released later this year as part of the award. Mo cheol thú!