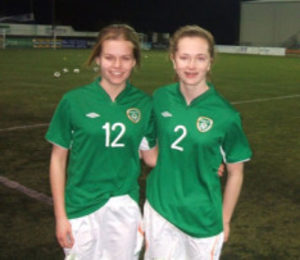 Last Tuesday night’s international friendly game between the Republic of Ireland Women’s U16 team and their Northern Ireland counterparts at Oriel Park proved to be a very special occasion for two students from the school.

Jade Reddy and Lynn Craven, Transition Year students at St. Mary’s both made their debut for the girls in green in the 1-0 win. Jade started the game at right-back before she was replaced, quite fittingly, by Lynn after 48 minutes.

It was probably inevitable that the duo would make their international debut together. Close friends from the age of four, the 15-year-olds have been almost inseparable since.

Quay Celtic was the club that provided the girls with their first taste of football. Lynn was part of the Point Road side that won the Dundalk Schoolboys League U10 and U11 league and cup double in successive years.

Jade then joined up with her friend as part of the Quay Celtic Girls side that also went on to win the double at U14 level.

Both girls currently ply their trade with Shelbourne in Dublin and were part of the Reds team that enjoyed a successful 2014, picking up the U16 National Cup, the U16 League Cup and also the Dublin Womens Summer League double.

Tuesday’s international was a warm up game for the upcoming international quadrangular tournament in Dublin in mid-February which will see the Republic of Ireland take on Denmark, Austria and the Czech Republic and the pair will be hoping to make the final squad which is due to be announced at the end of this week.