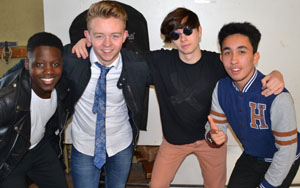 The plotline reveals that ‘Arnold’s’ (Ignas Stanislovaitas) is in danger of being taken over by a huge Fast Food corporation leaving the regular diners, and of course Fonzie, desperately scrambling to save their favourite meeting place. A dance competition sees Fonzie’s old flame Pinky Tuscadero (Kerry Lawless) return to stir things up and Marion Cunningham (Naoise Weldon) get ready to celebrate her son’s marriage to Lori Beth (Shauna McGuinness). 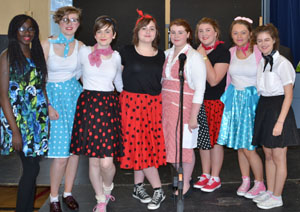 The Marist’s adaptation of the musical Happy Days mixed the vintage and the modern brilliantly. Fonzie delivered his chauvinistic advice to his crew on staying single with an upbeat rendition of Bruno Mars’ ‘Young Wild Girls’ while Marion reflects on the inequality experienced by 1950s women to the Beyonce tune, ‘If I Were a Boy’ belted out by Blaithnaid Finan Peyton. Pinky and her Pinkettes had the audience (and staff) singing along to ‘You’re so Vain’ aimed at Fonzie’s over confident personality. The cast really enjoyed re-enacting the dance scene from ‘Dirty Dancing’ and ‘Grease’ before Richie Cunningham proposed to Lori Beth in true Flash Mob style to Bruno Mars’, ‘Marry You’. 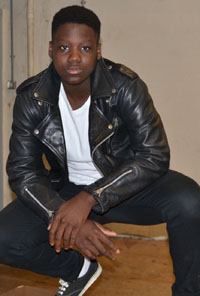 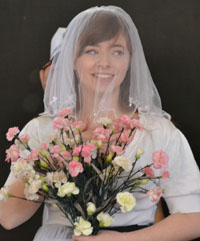 With St. Mary’s College soon entering a new era with the new school opening in April, it was wonderful to stage a production one last time in the old school. Teachers Pippa Brady, Aoife Mullen, Briege Kelly and Elaine Sullivan were delighted with the commitment and talent of the whole cast and would like to thank the PE and Art Department for their help and co-operation. Huge thanks to Care-taker David Boyle who couldn’t have been more enthusiastic and helpful throughout. 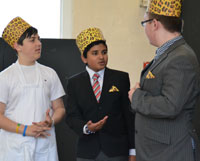 We are looking forward to entering the next phase of Marist musical performance with a brand new music room and drama space in the new school. Students will have ample opportunity to showcase their talent and continue to make their school community proud.