This year’s Marist Education Authority Public Speaking Competition took place on Friday the 13th of May in CUS in Dublin.  This competition is held annually between First Years from each of the three Marist Fathers’ schools in Ireland, which are under the patronage of the Marist Education Authority.  St Mary’s College had six First Year students representing their school in the competition, against six students from CUS and six students from Chanel College in Coolock.  The motion of the competition was “It is hard being a teenager in today’s world.”

On the day, the St Mary’s College students spoke outstandingly, proudly representing their school to a very high standard, with Xin Dacao taking first prize against able competition from Chanel and CUS.  A huge congratulations is due to all students who took part in the preparations and in particular the six students who represented their school so well on the day. 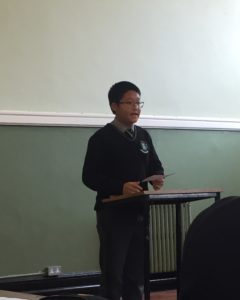