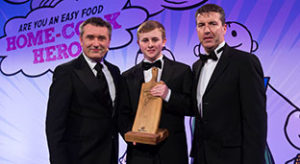 Fifth Year student Eoin Corr celebrated winning a treasure trove of prizes after he was crowned the overall winner of the Easy Food Home-Cook Hero Awards 2014!

Eoin’s big win was announced at a black-tie awards ceremony in the Shelbourne Hotel, with the night hosted by Martin King from TV3 .

Eoin entered the ‘Butter Me Up’ category of the competition where he had to make a sweet or savoury dish using Connacht Gold butter- his dish was an Autumn Streusel Cake.

Eoin was involved in a ‘cook-off’ which took place in cooks academy, where he presented his cake to the celebrity chefs judging panel. And he not only won his category but was also the overall winner of the competition’s ten categories! The event will be shown on TV3.