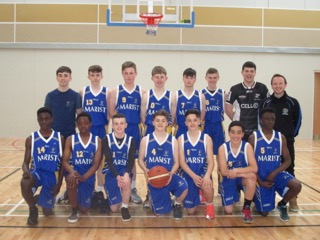 Massive congratulations to our 1st and 2nd year Boys Basketball teams on two very successful seasons. Both teams managed to get to the North East Regional C Final on the 7th of April 2016.

April 7th was a memorable day for our Second Year Boys Basketball team when they secured a fantastic victory over St Pats Navan in Carrickmacross by 44-30, to win the North East Regional C Final. Spectacular performances were given by Thomas Rice, Luke Markey and Elijah Faapito on the day as well as a brilliant team performance. The win ensured qualification to the All Ireland Playoffs which we then hosted here in St Mary’s College.

The Playoffs were held on Sunday the 24th April. 4 teams competed in a league style format where the winner of the group qualified for the All-Ireland semi-finals. We got off to a nervous start and were beaten by last year’s All-Ireland semi-finalists Piper’s Hill College, Naas. However the team showed tremendous courage and determination to put the loss behind them and show their true talent by winning their two remaining matches against St Pat’s Ballymena and Grange CS from Sligo. They were two very enthralling encounters in which Dean Carroll scored a last minute 3-pointer to win the match against St Pats, Ballymena.  Elijah Faapito demonstrated great composure to score two free throws in the last few seconds of the last match of the day against Grange CS before a brilliant defensive display closed the game out. It meant we finished second overall and provided this young team with invaluable experience playing in the All-Irelands. It has showed a lot of talent and promise for the coming years ahead. It was a fantastic team effort with some standout performances both defensively and offensively by Graham Stevens, Craig Callan, Elijah Faapito, Luke Markey and Thomas Rice. We are immensely proud of our students and are eagerly looking forward to next season. Well done and congratulations to their coaches Mr McShane, Tiernan Reilly and Gavin Erasmus.

The 1st year Boys team didn’t win on the day after a hard fought encounter with Mercy Ballymahon from Longford. Having reached the final, they still qualified for Round 1 of the All-Ireland playoffs against Castleknock in Dublin a week later. Unfortunately, it wasn’t their day but they showed great fight and determination. A massive congratulation and thank you to their coaches, Ms Gallagher and Tiernan Reilly for all their efforts.