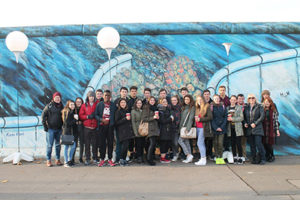 24 senior students from the Marist along with three of their teachers recently went on a very historic trip to Berlin. The group were there for the magnificent celebrations which took place for the 25th anniversary of the Fall of the Berlin Wall.

The group, under the excellent guidance of Mr. Flynn, Ms. Kirk and Ms. Doran, visited many famous sights such as the Brandenburg Gate and the East Side Gallery. They also had tours of the Jewish Memorial and Checkpoint Charlie, where they learned about the fate of many families at the time of World War II as well as many of the escape attempts from the old East Germany, after the construction of the Wall. The students also benefited from an extensive special tour of the Reichstag, the German Parliament.

The highlight of the tour was the 25th anniversary celebrations. There were over 1 million people in the city for the event. Along the former course of the Berlin Wall a new temporary Berlin Wall was built with thousands of illuminated balloons. The Marist group first visited Bernauer Straße where there is a section of the Wall reconstructed, which includes a watchtower, barbed wire and trenches.

They then gathered at the famous Potsdamer Platz, now a bustling tourist and shopping paradise, but during the time of the Wall it was a derelict no-man’s land. To the strains of Beethoven’s Ninth, the white balloons were released into the skies at night to commemorate the peaceful revolution of 1989 and the fall of the Berlin Wall 25 years ago. The atmosphere was electric with lots of cheers and shouts of joy from the crowds. There were then fireworks and a concert by well-known artists at the Brandenburg Gate.

On their final day, the students visited a German school and attended classes. They were delighted to meet other students of their own age and also to practice their German.

The group also had lots of fun each evening going bowling, as well as visiting the Winter Wonderland in the city, with its snow slides, ice rink and Christmas markets.