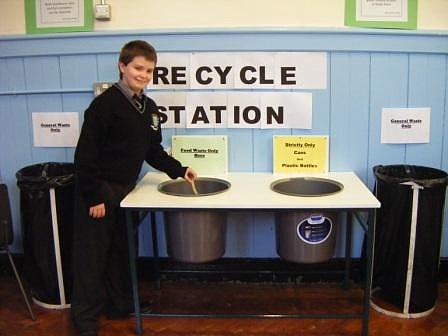 The staff and students of Saint Mary’s College were delighted to receive their first ever Green Flag, which was presented to the school in a ceremony which took place in Croke Park, attended by the school’s Green Flag Co-ordinator Ms. Siobhan Murphy and members of the Green Schools Committee, Shane Rice, Scott Watters and Clodagh Conlon.

A few weeks later it was with great pride and delight that the staff and students of St. Mary’s College watched the raising of the Green Flag. It was the culmination of a number of years of dedicated work to reduce litter and improve recycling in the school.

Green Party Senator Mark Dearey officially raised the flag and praised staff and students alike for their great achievement. He mentioned the importance of participation in the Green Schools Programme, and the impact each individual can make on the environment. Senator Dearey wished the Green Schools Committee the best of luck in their pursuit of the second Green Flag for Energy.

The Green Flag, awarded by An Taisce, is the result of several years of dedicated work, led by the Green Schools Committee, and recognises the efforts made by the whole school to reduce waste and litter. This has been achieved through an action plan which involved setting up recycling stations and bins throughout the school,  composting food waste, litter surveys and patrols, school clean-up days, participation in National Spring Clean Week and Repak National Recycle Week,  Composting Workshops, to name just a few activities. The school exceeded its target by achieving an increase of over 100% in recycled material, and by reducing the waste sent to landfill by 25%. Most importantly, the level of awareness of environmental issues has been raised significantly among the students and staff.